Source: The Sen Times
The Centre is likely to announce a hike of 5% in dearness allowance (DA) for its employees and pensioners in the month of September. The hike will be effective from July 1, 2019.
Finance Minister Nirmala Sitharaman
If the central government decides to hike the DA, it would be at 17 percent — the highest dearness allowance since 2016.
However, CPI statistic for June 2019 is still awaited, which will be released by the end of July.
As per an agreed upon formula, the Centre hikes the allowance taking 12-month average of retail inflation. The government does not consider the price rise rate beyond a decimal point for deciding the rate of the dearness allowance.
Click Here To View News REPORT 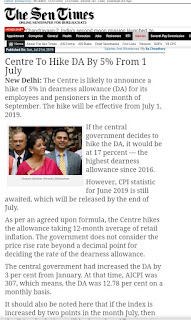