The next generation OnePlus flagship is currently one of the most hyped smartphones in the industry. Leaks suggest the handset will feature a new fullscreen display with a pop-up front camera as well as a triple camera system. 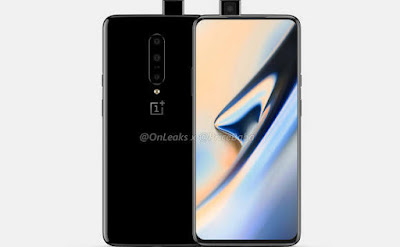 OnePlus 7 is one of the most hyped smartphones in the market currently. The company has so far shown off its 5G prototype device at the MWC 2019 and is expected to show off a commercial version of the same very soon. OnePlus did confirm that it will bring a special 5G-equipped smartphone before the mainstream OnePlus 7 comes out later in the year. While the 5G device hasn't been unveiled yet, the OnePlus 7 has leaked widely. The leaks have given out the design as well as specifications of the handset, leaving almost nothing to the imagination.
The biggest change the OnePlus 7 will introduce is a completely fullscreen display. Similar to its sister companies Oppo and Vivo, OnePlus is also expected to rely on a pop-up selfie camera for achieving the fullscreen display. Another major 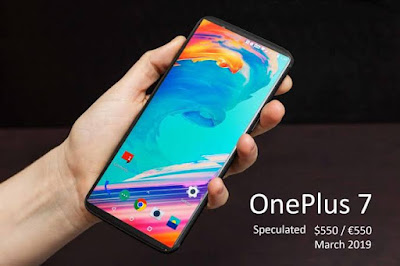 improvement expected in the OnePlus 7 is a triple camera system, with speculations of a 48-megapixel camera being the primary unit on the flagship level smartphone. As expected, the new OnePlus flagship will carry a higher price tag than the OnePlus 6T.

If you want to go for a fairly affordable flagship smartphone and are eagerly looking forward to the OnePlus 7, here's a list of all the features the phone is expected to bring with itself.

OnePlus 7: All we know so far

--The biggest change OnePlus will bring with its next-generation flagship smartphone is the inclusion of a fullscreen display with no notch on the top. OnePlus 7 is expected to sport a 6.5-inch Full HD+ AMOLED display with curved corners. It is even speculated that OnePlus 7 could get curve edges similar to Samsung's flagship phones.
-Similar to the OnePlus 6T, the OnePlus 7 will come with an optical in-display fingerprint sensor. However, OnePlus could also offer an ultrasonic fingerprint sensor from Qualcomm recently seen on the Samsung Galaxy S10.
--To achieve the fullscreen display, the OnePlus 7 will rely on a motorised pop-up selfie camera. Oppo and Vivo have introduced the pop-up selfie camera on their mainstream models and it was only a matter of time before OnePlus would follow suit.

--Another feature OnePlus 7 will sport is a new triple camera setup. Similar to Vivo's current flagship offering, OnePlus 7 is speculated to sport a 48-megapixel primary camera along with a 20-megapixel secondary camera meant for low light photography. The third camera will be a 5-megapixel depth sensor meant for bokeh effects.
--OnePlus 7 will also get the latest Qualcomm Snapdragon 855 chipset, which is the same one used on the Xiaomi Mi 9 and Samsung Galaxy S10. However, OnePlus could offer it with the Snapdragon X50 5G modem for 5G-equipped markets whereas India could get the 4G LTE variant. The base variant is expected to come with 6GB RAM and at least 128GB storage. OnePlus could also offer a variant with 10GB RAM and 256GB storage.
--The OnePlus 7 could also sport a faster 30W Warp Charging. The OnePlus 6T McLaren Edition already has the 30W Warp charging and OnePlus could offer it as standard on the OnePlus 7. No news of wireless charging has made it to the rumour belt so far.
--In keeping with the trends, OnePlus could also offer a bigger 4000mAh battery that could help OnePlus extend the battery life over the OnePlus 6T.
--OnePlus recently offered its community members to design the next feature of Oxygen OS. OnePlus has elected Its. Leandrooas the winner who suggests a cleaner UI overhaul for Oxygen OS. Therefore, Oxygen OS is expected to adorn Samsung's OneUI-inspired interface with more customisation options.
Share on Facebook
Share on Twitter
Share on Google+
Share on LinkedIn
Newer Post Older Post Home